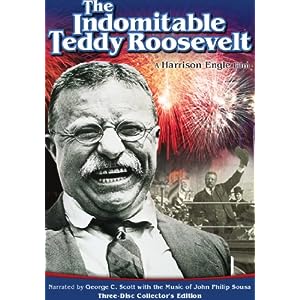 They just don't make presidents like they used to! Harrison Engle's 1986 film makes it easy to suspend your disbelief and get caught up in the enthusiasm of one of the most popular presidents in history. This is a remarkable film of a remarkable man. Watching this DVD is like attending an open air band concert on the mall. Few men can match the variety, notoriety, and successes of his relentless efforts. Even fewer Presidents can compare with his accomplishments. He's even on Mount Rushmore! TR was awarded (posthumously by President Clinton) the Medal of Honor for his heroics in the Spanish American War in 1898. He is our only President to be so distinguished. Roosevelt was awarded the Nobel Peace Prize for the 1905 peace treaty between Russia and Japan. Something he actually accomplished -- not just promised.
The twenty-sixth President is described by narrator George C. Scott as a man of action who wanted the common man to have a fair chance and a square deal. Distrusted by liberals and feared by conservatives, TR was known more for the results he achieved than for promises, claims, and rhetoric. He personally authored over a dozen books (no ghost writers). He was an outdoorsman, naturalist, conservationist, and of course politician. During his term as President, the number of national parks doubled and he worked hard to get the Grand Canyon recognized as such. His trip to Panama made history as he became the first sitting president to travel outside the country. He is often regarded by historians and critics as one of the five best Presidents along with Washington, Lincoln, Jefferson and FDR.
Previously aired on Biography and The History Channel, The Indomitable Teddy Roosevelt will be available on DVD April 13, 2010 (from Infinity Entertainment Group). We can enjoy a tour de force documenting the life and times of America's youngest President. Enjoy a romp through history at the brisk pace of a Sousa march, which in fact accounts for much of the soundtrack. The film includes remarkable footage of historical events, still photos, and re-enactments in both black and white and color. The set includes three discs: the feature, an audio CD, Sophisticated Sousa, and a bonus DVD. (I've enjoyed the Sousa CD in my truck on the way to work for several days now.) The bonus disc includes an interview with the director, photo archive, "Teddyisms" (memorable quotes from TR), a biography of John Philip Sousa, and Roosevelt's 1905 inaugural address.
Would I buy The Indomitable Teddy Roosevelt? Yes! In a downbeat!