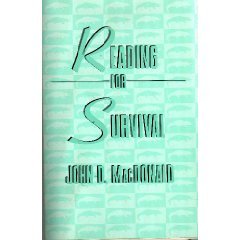 In a dangerous world filled with stress, the key to survival was memory. So says the author of The Executioners (later known as "Cape Fear"), John D. MacDonald. In his last published work before he died in 1986, MacDonald set out to inspire us with Reading for Survival. This thirty-one page essay was published in 1987 by the Center for the Book in the Library of Congress. It was also sponsored by the Florida Center for the Book in Fort Lauderdale. The essay takes the form of a series of conversations between his fictitious protagonist, Travis McGee, and his friend known only as "Meyer", an economist, teacher and lecturer. The opening scene finds the two in a docked houseboat darkened by a thunderstorm. The conversation begins, as does the authors opportunity to share with us his concerns for reading, readers, and non-readers.
Meyer guides us through his version of the evolution of communication beginning with our earliest ancestors' dependency on memory in order to live in the wilderness, recognize signs of nature and the animal kingdom, and then share that knowledge with future generations. Once the amount of information required was too massive for memory alone, we started making marks on pottery, then cave walls, and the next thing you know, Gutenberg got the masses involved with his press. Books became artificial memory before the gigabite arrived. Now we have tons of information and it's available to us at the speed of light. Google found over nine million results for "gutenberg", in 0.28 seconds. What do we do with all this information? Do we need that much? Consider Len Bias.

Len Bias was a talented basketball player at the University of Maryland. He was a senior during the same year that Michael Jordan was enjoying his second year in the NBA.
Bias was the second player drafted that year and went to the Boston Celtics. Two days after the draft, he died of a cocaine overdose. Kenneth Rosenau wrote in The Palm Beach Post, "That [Bias]..was finishing his fourth year at an academically respected school without a prayer of graduating is also an outrage that should be addressed."And "[He]...was twenty-one credits short of having a degree." Was Bias any better off than the homo erectus who couldn't remember which snake was poisonous? Would his judgement have improved had he been a better student? Meyer asks, "Can one examine his own life without reference to the realities in which he lives?"
What about the non-reader, the person who wants to believe because he isn't well informed and doesn't understand the risks? He's the one "born every minute" that signs up for that variable interest loan with a dubious lender. MacDonald warns us of the teacher who promotes himself as the translator. Beware the translator who interprets the information for you. Think for yourself he suggests. Education, literacy, reading, thinking and remembering are MacDonald's prescription for enduring. He leaves us with a warning from Mark Twain, "The man who does not read good books has no advantage over the man who can't read them."
Encourage non-readers to enrich their lives and better comprehend the word around them -- by reading.
Posted by FCEtier at 8:39 PM