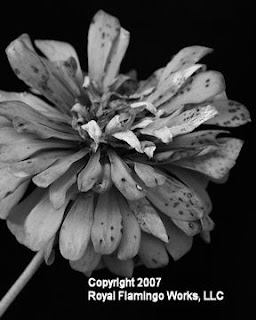 Today's guest blogger is my dear friend, Miriam Goldberg. She wrote this essay to accompany my entry [shown here, "Dead Zinnia"] into the Fragile Earth photo competition at Western Carolina U. My entry was one of 96 accepted in a field of over 500.
================

Haiku
Snowflakes fall then melt,
their time profoundly fleeting,
in them I see us.

Do you know how many species of life there are? How many have disappeared? How many are disappearing? If your answer is “yes,” let’s sit down to tea. Because only God knows answers to these questions. Man has never known with whom or what he shares planet Earth. Just as you may know many, but not all, of the people who live in your town, we have a rough idea of our global neighbors. We know that within our own species lie great mysteries which define our differences, and we willingly admit that there are things in nature that defy our understanding, yet we seldom let our ignorance prevent us from making dire pronouncements on the state of the planet or its inhabitants, both plant and animal.
When a species is added to an endangered list, numbers dictate its inclusion. Low numbers. Perhaps, though, one of Earth’s most fragile species numbers in the billions. A species with a sketchy survival instinct that could easily paint itself into oblivion—that’s us.
Save the tigers! Save the rainforest! Save the whales! Save the polar bears! The list sometimes seems endless. How about “Save yourself!”? Let’s save ourselves from those who predict the death of our planet by a new ice age or a global warming. Let’s save ourselves from those who predict our future based on a pond’s frog population or the number of butterflies that drown in the Gulf of Mexico each autumn. Let’s save ourselves from our own words and actions by finally seeing our purpose on Earth.
We, the arrogant “owners” of the planet, are more bird-brained than the lowliest of birds, if any bird could be considered lowly. In arrogance, we strut around like peacocks; we crow our reign over all things living as if any other species agrees we have more of a right to this space than they. We’re cuckoo, and we are on our way to dodo status. It’s time to think small, my non-feathered friend.

As a species we strive for more territory, more influence, more power, more comfort, more knowledge. How about more understanding? Instead of solving problems by creating problems (such as the DDT solution or the Ethanol solution), let’s solve problems by understanding and eliminating them. No one would seriously blame the extinction of a species on that species, but we seem bent on deserving that responsibility. Has there ever been a more self-destructive species than man?
We expand our territory to include areas that are hostile to us, then attempt to eradicate the hostility, whether by resettling human populations, relocating crocodilians and bears, building sound barriers, rerouting rivers, or any of our other often futile endeavors to recreate and rule our environment. We think big. We want more. When we create a problem, we don’t solve it, we hide it with another, bigger problem, and we keep doing it until it’s seemingly unsolvable. The planet, however, has a simple solution: extinction. The phrase appearing on the tombstone of the extinct Homo Sapiens should be, “All they wanted was more.”
Our footprints are large, but not ineradicable. We feel we have no borders, no limits; this earth is ours! We believe that we are the proprietors of the planet, the invincible rulers. How nature laughs at us. We are so mighty, our entire species can be taken down by a microscopic, nearly invisible entity. We, whose numbers are large and whose influence seems boundless, can be exterminated by a virus. Our history of reproduction, colonization, and victory is primitive compared to what a virus can accomplish. Or a bacterium. Or bug. While hikers may fear a bear encounter, or swimmers a shark, so many more of us succumb to attacks by predators we have invited by invading their territory.
We affect climate, we affect nature, we affect each other, but we blame all these things for their effect on us. We are as fragile as earthworms and fireflies; despite knowing we are mortal, we feel invincible. Therein is our weakness, our fatal flaw. Our footprint is large, but when we no longer walk this planet, the earth will quickly recover. Nature will overtake our cities, our homes, our factories, and malls. Birds will make nests in our plastic shoeboxes, cockroaches will eat our wallpaper, all species—known and unknown to us—will benefit from us having been here, but gone. And the planet—self-cleaning as it is—will eliminate the damage we have done, burying the indestructible with earthquakes, hurricanes, tsunamis, and all it has in its considerable arsenal, while life continues and makes use of our remains.