I did a good deed today.

The Eight Sentences
His smile brought her a sense of calm and a reassurance of safety as it always had.
She leaned forward to push her chair back and stand to greet him.
He waved it off, “Keep your seat. You look so comfortable, Claudia, the epitome of self confidence and bliss. Your smile is radiant.”
“Am I smiling? It must be because I did a good deed today.”
Debert nodded understanding, and returned the smile.

The Back Story
Mr. Debert (DAY'-bear) is Claudia's muse and confidant. They often meet at her favorite Irish pub when she's in NYC, the tir na nOg. This conversation occurs about a half hour after her altercation with the mugger (from last week's excerpt.)

A Year Without Killing

The Eight Sentences
An African-American woman who appeared to be in her late sixties stepped onto the sidewalk and walked towards Claudia. That woman’s about my age, Claudia thought.
Then it happened.
A tall skinny male Goth stepped into the black woman’s path. He grabbed the strap on her purse and jerked it from her grasp. His next decision was one of the worst of his life. He ran right into the path of a semi-retired assassin with a sense of justice.
As he passed, Claudia Barry stepped into his path and delivered a forearm to make Anthony Munoz proud.

The Back Story
A Year Without Killing is a work in progress and will be the third in my series of novels known as the "Barry-Hixon Conspiracy."  This is the sequel to my first book, The Tourist Killer, which ends with professional assassin Claudia Barry beginning a twelve month leave. She had planned to retire, but was convinced by her assigner to take some time off before making the final decision.
Today's excerpt shows how difficult it will be to take off from work. It's from Chapter One.

Recently another author invited me to participate in a “blog tour” by posting an article in which I answer several questions. Here goes.

My writing time in addition to blog articles is focused on my third novel, A Year Without Killing. This will be volume three in the “Barry-Hixon Conspiracy” series. It is also the sequel to my first book, The Tourist Killer. Writing is not my full time occupation, so it make take a while. If it all works out, maybe AYWK will be available in time for Christmas shopping. 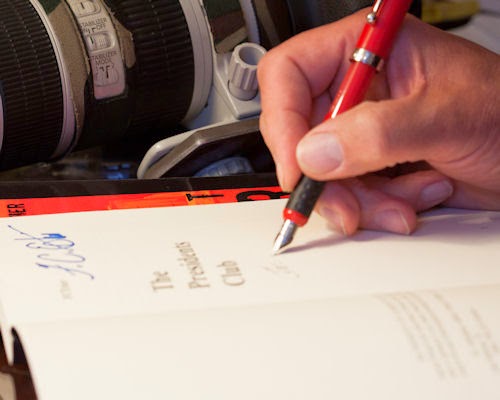 While some books neatly fit into a particular genre, I’m not a big fan of the genre-labeling game. My first book prompted this comment from reviewer, Blaine Coleman, “The Tourist Killer is a complex story that’s difficult to pigeonhole into a single category: is it a novel about crime, international intrigue, a psychological thriller, a look into the mind of a paid assassin, or, is it a romance?” You could say that my books are “crossover” in terms of genre and that’s what makes them different.


Dale Carnegie said to speak about something that you have: 1. earned the right to speak about (personal experience) or 2. done extensive research and can speak about with knowledge. Applying his advice to writing, I write about what I know. My wife says I talk too much and she’s probably correct. My editor prefers me to use dialog to drive the story so I put my experience to work. The combination has earned kudos from reviewers for the conversations in my books. From a review of The Presidents Club, “Also intriguing are the elderly men themselves, their histories, and their opinions. Although they are, at times, catty, insulting, and sly, they seem like people we'd want to know (Hey, Louie, bring me a beer.) Etier has captured real conversations as the characters' comments overlap, entertain, and yes zing each other.”


I write for the same reason many readers open a book -- escape.
The time spent with my characters is wonderful and meaningful.
If I can escape and become totally absorbed with my characters in the story, then, perhaps my readers can also.
When I write dialog, it helps to (as they say in the theater), "get into character."
When a few weeks pass without writing, and then I return to it, I'm always surprised at how much I missed being with my literary friends.


When I begin a project, I think about characters and make notes on them. An overall story arc helps and then I write the first and last chapters. At that point, I turn the characters loose and hang on for dear life. It is often surprising what the characters do.
It is never disappointing and that’s why I love writing.

At least three of my writer friends will receive an e-mail from me soon with an invitation to answer the same questions and invite three of their fellow authors.
Posted by FCEtier at 10:21 PM 3 comments: