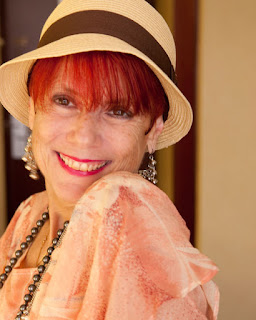 “Published reviews are cheap advertising; the only cost to the author is that of the book and postage. Being reviewed, though, is not the most important thing – getting a positive review is. The more a reviewer raves about a book, the more interested people will be in reading it.” -- Bob Etier, Jan. 2010 Blogcritics - There’s So Such Thing as a Bad Review

Author Claude Nougat agrees and writes about her experience HERE.

Bob Etier, author of "Bob On Books" and known to many as, “Miss Bob,” wrote the essay quoted above almost two years ago. During that time, she has written over one thousand reviews. Most of those reviews were for books and DVDs.

She recently began a series of articles for Venture Galleries aimed at helping authors set themselves up for success. At least success in receiving favorable reviews for their work.

In case you missed them, here are the first five:

The weekly articles appear on Mondays in her blog on VentureGalleries.com.

So...read her articles and get more favorable reviews.
Posted by FCEtier at 12:13 PM 2 comments:

My first novel, The Tourist Killer, is now available on Amazon.  The print edition will be out later.
In this scene, retired FBI agent, John Hixon, and his billionaire client, Julian Thibaut, ponder their relationship.

The two men who seemed to have little in common, yet made companions by a finesse of fate, stood and admired the one acre pond in the valley below Hixon’s redoubt. It was a smooth and clear mirror reflecting the beauty of the mountains in the early morning light.Later, a gentle breeze added ripples to the surface but when the sun found clear skies above the balsam pines, a painful glare obstructed the view.  Unexpected events had forced the cooperation of opposing personalities. As they stood there admiring their surroundings, each man questioned how they would relate to each other. Would they become friends?

The Evolution of a Book Cover


“It's getting very near the end.” -- Lennon/McCartney

Writing my first novel, The Tourist Killer, took longer that expected. When the end of the actual writing task became clearly visible on the horizon, the thoughts of a book cover design moved up the priority rankings in my mind.

I went to Amazon.com and began to study book covers in the appropriate genre -- political thrillers.

In short order, it became clear that repetition exists.  Several authors chose the same stock images. My publisher confirmed that situation is common in the business.  It was anathema to me.  I’ve been a photographer for years and the transition to author brings the baggage of a preference for originality, creativity and a desire to be unique.

The solution came from an unexpected source.  The principal character in my book is Claudia Barry.  She said, “Use one of my paintings!”

As the book opens, we meet Claudia as she completes an assignment. This professional woman is in her early sixties and contemplating retirement.  Her favorite hobby is oil painting.  However, there is a scene in the book where she decides to experiment with another medium. [The reasons for this change would be a plot spoiler.] The result is a watercolor painting of the Manhattan Skyline as seen from Frank Sinatra Park in Hoboken, New Jersey.

David Ammons of Sylva, North Carolina has been painting in both oil and watercolor mediums for about ten years. Recently his work has sold quite well at his page on Art-3000. David agreed to produce a painting and sign it as “Claudia Barry.” He worked from one of my photographs. Readers of The Tourist Killer will find a special note of thanks on the “Acknowledgements” page. 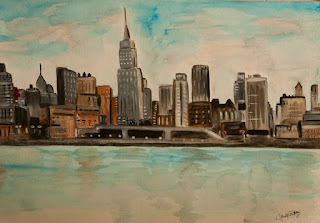 My publishers, Venture Galleries, art critics and other publishing contacts of mine, all were enthusiastic about David, er, Claudia’s work.  Not to leave a stone unturned, we consulted professional book cover designer, Jeff Bennington, for his thoughts. Jeff liked the watercolor piece as well and using it as a starting point, created a dynamite cover. 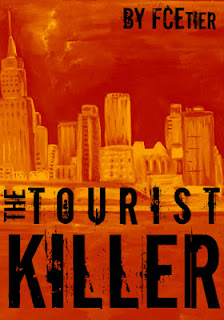 If readers enjoy the content of The Tourist Killer as much as those of us involved like the cover, we should have a best seller.

Special thanks again to both David Ammons and Jeff Bennington.
Posted by FCEtier at 8:14 PM 2 comments:

Julian Thibaut, an enigmatic billionaire, is described (in part) by this snippet from my soon to be released novel, The Tourist Killer.

Baltimore, MD was north enough for Julian Thibaut.
He had long since separated himself from many of the divisive attitudes and cultural incongruences of the Deep South, but he could not forsake his family heritage and locate his corporate offices north of the Mason-Dixon Line. He disdained most of what he knew about everything inside the beltway. Thibaut did not talk slow. He did, however, take the time to caress each word. It was because of this habit that New Yorkers would say he had a Southern drawl.

Comments and feedback appreciated. Now, please check out the work of over 170 over great writers HERE.

The Setup:
In this scene from The Tourist Killer, a visiting Yank has a private meeting with his boss's personal assistant at his apartment in London.
I call it a "Prelude to a Kiss."

She put her drink on the table between them with a slow deliberate motion, all the while maintaining eye contact. The steel blue eyes from the afternoon’s meeting somehow seemed a bit softer now. Griffin Challenger was about to experience a secret that every other member of the management team had previously enjoyed. A dangerous secret that they all knew could end their careers, and possibly their lives as well — if they broke silence. With a simultaneous motion, she slipped off her heels and with both hands reached up behind her head to undo the bun. Her hair fell well past her shoulders with a shake of her head.

Comments appreciated. Now, please check out the work of over 100 other writers HERE.
Posted by FCEtier at 8:06 AM 10 comments:

My six for the week

The setup:
Claudia Barry, professional assassin, talks about her career choice and how she deals with the challenges of such a career.  Here is an excerpt from a conversation with one of her very few confidants:

Like everyone, my life is made up of a number of roles that I must play. Not a single one of them has any room for doubt, apprehension or a lack of confidence. Sometimes I change roles several times a day. Sometimes, I stop in between roles. I stop to listen when I cannot hear a thing. There’s always something there.

Comments always welcomed. Now check the work of over 180 great writers with their six sentences, HERE.
Posted by FCEtier at 7:13 AM 6 comments:

Promote your novel with video

A few months ago, I clicked on the "Send" button and propelled my first novel, The Tourist Killer, out into cyber space and to my publisher, Venture Galleries. 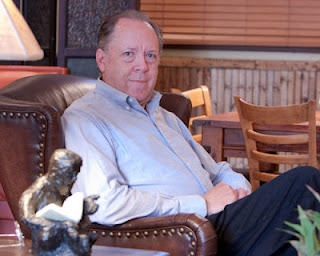 While awaiting a response (we're currently in edits and re-writes now), I began plans for promoting my work. My publisher had cautioned me back in March about beginning promotions before we had a product to sell. While awaiting the first one hundred pages with red ink all over them to return via UPS, I contacted several friends and associates and let them know I was working on a book.

In the summer of 2011, I had run into a video producer at Folkmoot, USA in Waynesville, NC.
Art Hoffman and I struck up a friendship via e-mails and phone calls and planned to met in person at the 2012 Folkmoot. The rapport was instant and we were both surprised at the numerous interests we have in common.

My previous experience reviewing books and numerous interactions with publicists from independents and vanity publishers to the big houses like Simon and Schuster had made me familiar with video book trailers. Some of my friends have complimented me as being a "natural born salesman" so using a video clip to promote my book will come as no surprise.


Collaboration with Art resulted in three planned videos to support my novel and he surprised me with an unplanned, unofficial trailer, as a gift. It may turn out to be an effective sales tool.

According to writer, Rye Barcott, book trailers are now essential in selling books. Even though I haven't sold the first book, I tend to agree. My plans are to spread all four videos around the social media beginning a few weeks before the book hits the streets and on into the months following release.

The four clips include:
1. The video producer interviews me
2. Selected readings from the book
3. Visiting the sites, scenes, locations in the book
4. Bonus video in movie trailer format.

We planned to keep the trailer close to three minutes and were successful. However, the interview ran close to five minutes.  We shot it while setting up and arranging the scene for the shoot.

The interview is above and the others will be discussed further in future blogs.

Thanks again to The Blue Ridge Book Store in Waynesville, NC for the use of their reading room.

Watch for The Tourist Killer in late October or early November 2012 from Venture Galleries.