A Gift for My Father 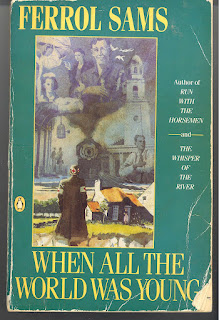 In my lifetime, it has been a wonderful blessing to have given many gifts that meant as much, if not more to me, than to the recipient.
Few of those gifts can top the one arranged for my father’s birthday about 15 years ago.
Not sure where the idea originated, but it seemed like something worth trying. If it worked, it would be memorable. It did, and it was.
The research to find the author’s phone number was amazingly simple. In the late 1990’s he was a practicing physician. Why wouldn’t his number be published?
“Hello. Is this Dr. Ferrol Sams?”
“Yes. This is he.”
“I’m calling because your book, When All the World Was Young, is my father’s favorite book. He’s one of those veterans that never wanted to discuss the war. He convinced me to read your book and now I know why. It speaks for him.
“Getting me to read your book was his way of telling me about his experiences in World War II. Something he could never do. Today, December 7, is his birthday. If I give you his number, would you call him?”
Dr. Ferrol Sams replied enthusiastically, “Yes! I’d be happy to!” 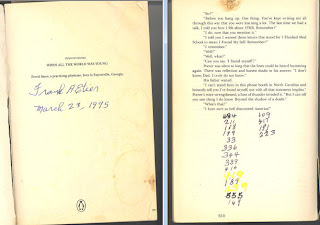 It’s 2012 now. Dad died back in November of 2005, the day after Veterans Day. He was ninety-one. By the time of his death, I, too, had read When All the World Was Young several times. In my father’s last few years, we visited often. Sometimes by phone. Many times in person.
The eccentric and inspirational characters created by Dr. Sams had become regular topics of our conversations. Dad and I spoke of them as if they had been family members or friends from our small Northeast Louisiana town. After the birthday telephone call, that had been so meaningful for us both, Dr. Sams became part of the gang, too. Thinking back on setting up the phone call from Dr. Sams, I realize how much that gift to my father still means to me.
Dad and I referred to the men and women we had read about by their first names. They created an additional bond for father and son. Laughter often dominated our discussions and it was wonderful for him to be able to talk about the war in his own way.
Last week, I started reading our favorite book again. Spending time with such great mutual friends reminds me of what a wonderful man my father was, the great conversations we shared -- and how much I miss him.
Posted by FCEtier at 2:10 PM 3 comments:

Email ThisBlogThis!Share to TwitterShare to FacebookShare to Pinterest
Labels: fcetier, ferrol sams, run with the horsemen, when all the world was young, whisper of the river

Social media is abuzz with interest on DIY publishing. What's a person at home with a computer, some creativity, and a desire to be read, to do?   We decided to turn to a man who spends a great deal of his time writing, reviewing books and helping authors.

Attorney and author Stephen Woodfin is in charge of the book division of Venture Galleries and Gallivant Press.  He was one of the top five graduates in Kilgore High's class of 1970. He attended Kilgore College (A.A. 1972) and obtained a B.A. in religion from Dallas Baptist College, magna cum laude, in 1974. He continued his education at Southeastern Baptist Theological Seminary in Wake Forest, N.C., where he received a Master of Divinity degree in 1979. While at Southeastern, Woodfin received the Cullen Midler Award in Theology, which is awarded annually to the student who presents the best paper in Systematic Theology.After working in Dallas for several years, Woodfin moved to Waco, Texas, to attend Baylor Law School. He took his law degree in 1985 and has practiced law continuously for the last 25 years.

Venture Galleries has been established as a new marketing and publishing house that showcases, promotes, and markets the works of talented Indie authors and artists who are building a niche in the marketplace.
We caught up with this busy man earlier this week for a brief conversation. 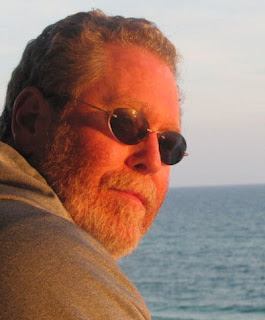 ==============
FCEtier: As an independent publisher at Gallivant Press how do you see the current world of publishing?
Woodfin: The digital world of independent (indie) publishing represents the biggest change in the publishing industry since the advent of the printing press. Today virtually any author can gain access to the whole world through the Internet. It is the best thing that has ever happened for writers.
FCE: How does that differ from the old model of traditional publishing (TP) which dominated the field for so many years?
Woodfin: The fundamental difference is that authors no longer have gatekeepers. In TP an author would finish a manuscript and submit it to an agent (if he could get one). The agent then would act as the go-between with a publishing house .  So, the agent was one gatekeeper, the publishing house another. Since paper books were so costly to print, distribute and market, the author had no freedom to self-publish his own work.
With digital publishing the cost of paper is no longer a factor, and gatekeepers have lost their place in the publishing process.
FCE: What do you see as the relationship between print books and eBooks?
Woodfin: Ebooks are here to stay. Each year their sales grow exponentially.  This pattern will continue, fueled by the proliferation of cheap eBook readers and devices like the Kindle Fire, the iPad and the Nook. Paper books will suffer the same fate as vinyl records.  This is an emotional issue for a lot of people who love the experience of reading paper books.  But, it is simply a matter of a new technology, in this case eBooks, becoming the norm.
A related issue is pricing of eBooks versus paper. TP has tended to keep eBook prices high in order to protect paper books that are priced even higher. As eBooks take over the market, publishers will have to respond by adjusting the price of their eBooks.  No one yet knows where this price point will settle.
FCE: What are the greatest challenges for indie authors and publishers?
AWoodfin: What we see right now is a tremendous surge in the number of new eBooks in the market place. So the biggest challenge for an author in this climate is finding a way to stand out from the crowd.
FCE:  If an author can self-publish without any gatekeepers, why would he want to sign on with a publisher like Gallivant Press?
Woodfin: There are a lot of reasons.  Gallivant Press pays royalties and does not charge its authors for its services. On the front end, the author gets the benefit of editing, cover design and book formatting, all of which he would have to pay for out of his pocket if he chose to self-publish. Next he receives an immediate strong presence on the web through our world class website that will host his blog and display his work. Finally, he receives the benefit of Gallivant Press’s marketing efforts on his behalf.  In essence, Gallivant does some of the heavy lifting for him, which gives him more time to focus on his writing. If the author doesn’t make sales, Gallivant doesn’t make money from his work. It’s a great way to establish a partnership with author and publisher.
FCE: Tell us about THE INDIE TRUMPET.
Woodfin: THE INDIE TRUMPET is a publication of Gallivant Press, the imprint of Venture Galleries.  We have designed it to provide cutting edge information of interest to indie authors and the reading public alike.
FCE: How does THE TRUMPET monitor all that information and collect it for its readers?
Woodfin: It is a daily newspaper that utilizes Paper.li to construct and deliver it.
The process of putting the paper together is a study in the importance of social media in today’s publishing environment.
The articles that appear each day come from links imbedded in tweets of a select group of Twitter accounts.  Gallivant Press decides which Twitter users are potential sources of articles for THE INDIE TRUMPET, and Paper.li’s algorithms extract the articles from the links and publish them. This gives us fresh content every day from a large number of hand-picked Twitter users.  When THE INDIE TRUMPET hits the digital newsstand every day, readers around the world see it and spread the word. It is fun for people to see their work featured on the front page, and Gallivant Press enjoys providing this service.
Posted by FCEtier at 9:09 PM 4 comments:

“Can you do better with that price?” a woman asked the photographer selling his work outside Grand Central Station.
The matted print was marked $450.00.
“Yes, I can. How about $575.00?”
The expression on her face was her silent reply and the artist was inspired to continue.
“Look lady. I take pictures of places I’ve been and people I’ve met. My photography is a record of my life. My life has value. I won’t negotiate the value of my life.”

He didn’t make the sale, but he made his point.

For many artists, their tool is a pen (or keyboard) rather than a camera. Their inspirations come from life as well.
Observing others and living their own lives.
For many writers, it’s almost impossible to avoid some autobiographical influence in their work.

Writers do what they do because it’s their life.

Two years ago, I reviewed a 31 page essay entitled, Reading for Survival by John MacDonald. MacDonald extols the virtues -- and necessity of reading. We simply must read.

Those who are inspired to write, feel strongly that they simply must write.

Getting what you have written published typically was not easy. Today, you just need a computer and an internet connection. Could it really be that simple?

The transition from blogger to publishing a novel is not easy.

The marketplace is listening to those who want to get published and there are numerous resources available. A trustworthy and valuable source of information is The Indie Trumpet. 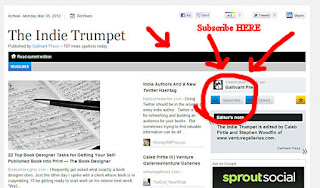 Caleb Pirtle, of VentureGalleries.com describes it,The Indie Trumpet was created and developed by Venture Galleries and Gallivant Press as a daily publication to provide articles, information, and  insight that are designed to help independent authors in their efforts to promote, brand, market, and sell their books in this new and growing age of indie publishing.”

Watch for our interview soon with author Stephen Woodfin of Gallivant Press. We will discuss the opportunities of independent publishing.
Posted by FCEtier at 11:52 AM 4 comments:

Was the greatest generation colorblind?

Some of the most memorable images that come to mind from that era, we remember in black and white. Most of us probably have a few favorites. 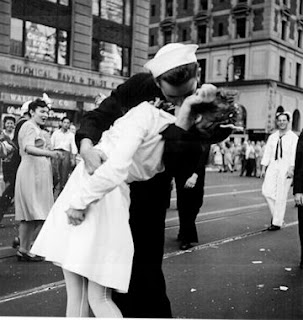 The sailor kissing the nurse in Times Square. (Image credit: WikiCommons)
I recently reviewed an interesting and important book: America at War in Color.
Fathers and grandfathers of baby boomers not only remember the war in color, they experienced it in color.
America at War in Color includes the story of one of the most memorable images from the war. It was taken near the end of the war on a small island in the Pacific. One of the men in that picture left autographed copies of it for his children. He chose to leave with with color prints.  Great story.

(Image credit: WikiCommons)
Posted by FCEtier at 9:07 AM 4 comments: