Is Tyrann Mathieu a better student than Len Bias was? 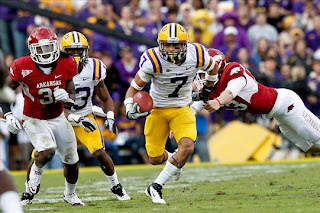 [Shown above is Tyrann Mathieu, aka "The Honey
Badger," returning a punt for a TD against Arkansas
in the 2011 regular season game.] Image credit,
GameDayR.com
Scott Rabalais’s column has long been a personal favorite. I enjoy his writing style and his in depth reporting on LSU football.  Rabalais is a sports writer for the Baton Rouge daily newspaper, The Advocate. His conclusions are often easy with which to agree.

This excerpt from his article of August 11, 2012 about the decision of LSU to end their relationship with Tyrann Mathieu got me thinking.

“But there is a human drama at play here as well. If, as it has been reported, it is correct that Mathieu had to be kicked out after failing multiple drug tests, then the concerns for a human being far outstrip the concerns of how LSU will be able to stop Arkansas’ offense on third-and-6 come November.
Whatever Mathieu did, he couldn’t stop doing it. And the inability to keep his life moving in a positive direction, toward virtual immortality as an LSU football player and a virtually life-lasting fortune in the NFL, is deeply troubling.”

Later in the day, after the above named column was published, Mr. Rabalais tweeted that the name of Ryan Perrilloux has come up frequently today. (Perrilloux suffered the same fate at LSU as has Mathieu.)

My thoughts go back even further, to Len Bias.

I reviewed a book a few years ago entitled, Reading for Survival, by John D. MacDonald. After re-reading that review a few moments ago, my thoughts now turn to Mathieu and how good a student he is.

I have some hopes for young Mathieu and pray that they come to fruition in his favor.

I hope that he is a better student than Len Bias was.
I hope he can read and comprehend better than Bias could.
I hope he finishes his education and earns a degree -- wherever he attends school.
I hope he overcomes his addiction (whatever it may be) and, finally,
I hope his past will not create a negative bias against his future.
Posted by FCEtier at 4:30 PM 2 comments: