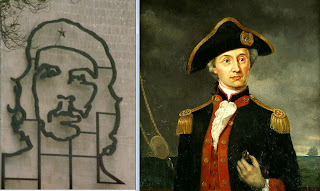 Take it off. Take it all off.

“Night Train” usually evokes images of a dank, smoke filled lounge with a stripper on a small stage. Three or four middle aged men sit around the stage anticipating more than they know they will see. The stripper is a late 30’s, early 40’s dancer about ten to fifteen years past her prime. She’s twenty pounds overweight and accepts with indifference the appearance of cellulite on her upper thighs. The dancer and her audience have one thing in common -- boredom.

That was the opening paragraph in my review of Louis Prima, Jr.’s latest CD, “The Return of the Wildest!”  It hits the streets on Tuesday, July 10, 2012.

Shortly after that review went live, I found this image on Pinterest: 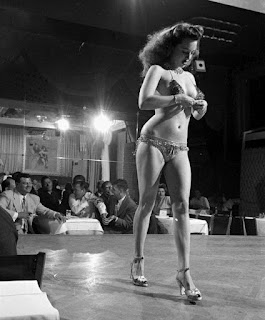 It’s not exactly what I had in mind with the review, but close enough.

According to Wikipedia, women have been taking their clothes off for the entertainment of men for over 400 years.  (I would have guessed longer.)

Does the frequency of movie scenes with strippers and the rise in popularity of gentlemen’s clubs indicate a new interest in this form of entertainment?

Did the budding popularity of this art form propel the evolution of the appropriate musical accompaniment?

Tenor sax man, Jimmy Forrest had a big hit in 1952 with “Night Train.”  In his examination of the propensity of black musical performers’ cultivation of white racism, Alan Kurtz says of Forrest’s hit, “..it gave strippers across the land a vocational platform upon which to stand and peel for years to come.”  With Prima Jr.’s cover, we’ve come full circle in sixty years.

During the interim, men’s eyes have been filled while listening to such sultry strains as “Blame It on Mame,” “Love Potion #9,” Dave Grusin’s “A Great Effect,” [from The Graduate] and of course, the classic David Rose number, “The Stripper.”

In spite of the evolution of the music and the revolution of interest in this form of entertainment, many of our readers will be like Charlie Rich and be more at home with what happens behind closed doors.

Article Copyright ©2012 by Chip Etier. All Rights Reserved. Unauthorized use and/or duplication of this material without express and written permission from the author is strictly prohibited. Excerpts and link backs to this story may be used, provided that full and clear credit is given to the author with appropriate and specific direction to the original content. Violators will be prosecuted to the extent that the law allows.
Posted by FCEtier at 7:23 AM No comments:

To commemorate their 50th anniversary the Rolling Stones commissioned Shepard Fairey to update their classic Tongue and Lips logo, originally designed by John Pasche in 1971.

What do you think?  Like? Not?  Comments welcomed!
Posted by FCEtier at 4:18 PM 4 comments: