The Rock and Roll Hall of Fame and Museum opened their exhibit today honoring female artists that have made a significant contribution to rock and roll.
Women Who Rock: Vision, Passion, Power fills two entire floors and will run through February 2012. More than sixty artists have been selected for the spotlight and many have memorabilia on display including a dress worn by Momma Cass, Lady Gaga's piano and Patti Smith's boots. Musical instruments, original drafts of lyrics and other interesting artifacts will be on display.
Watch for links to additional coverage as the story continues with a concert on Saturday, May 14 featuring Cyndi Lauper, Wanda Jackson, and Darlene Love.
Posted by FCEtier at 6:29 PM No comments: 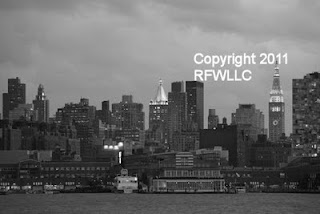 During the last week of April 2011, my wife and I visited New Jersey and completed a photo shoot of the New York City skyline. Three locations proved excellent for the shooting. Over two dozen images made the cut from several hundred shots. Check back to the link above over the next few weeks as more will be added to the Zenfolio gallery as they make it through the editing process.
We visited the boat basin near Fort Lee, NJ, just North of the George Washington Bridge. While there, we also got some great shots of the palisades.
Next was the tennis club at Binghamton and then on to Hoboken, where a great pier just South of the Frank Sinatra Park turned out to be a great vantage point.
While in New Jersey, we also visited the Liberty Science Museum and Liberty Park. Additional shots of the skyline were made there as well as the Statue of Liberty. Those images will be the subject of a future blog post. Check back soon!
Posted by FCEtier at 6:16 AM 2 comments: