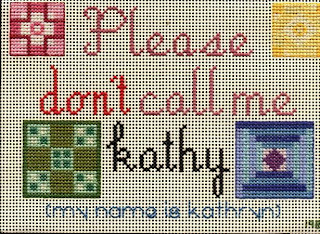 My wife’s name is Kathryn. She has always preferred to be known as “Kathryn” or “Kat”. She cross-stitched a small sign (pictured at right) for her desk to prevent people from calling her “Kathy”. One day, a co-worker placed a sticky note over the “Kathryn” on the sampler that read simply, “Bob”. She thought it was funny and told me. From that moment on, I’ve always called her “Bob”. When she moved to Baton Rouge to marry me I got her a credit card with Bob Etier on it and introduced her to everyone as “Bob”. When the pastor announced at church that he was going to marry Chip and Bob after service that day, it raised a few eyebrows.
Bob later became a teacher at the church’s day care and the kids began to call her “Miss Bob”. She now has a custom plate on her car with that on it.
Many of our friends felt this story was charming. Once they got to know her, they realized just how charming Bob really is!
Posted by FCEtier at 8:03 PM