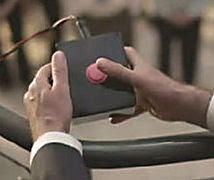 Since the television and motion picture industries started self-governing themselves and attempting to apply some standards to their products, it seemed as though killing children on-screen was a taboo.
A despicable ad campaign came out in October 2010 with an effort to scare people into supporting the climate change movement. Not only did they blow up children and adults who didn't consent to their "no pressure" approach, they succeeded in getting explosive reactions with an epic fail production.
Check out my wife's commentary on the campaign in her article here. As she says, if nothing else, "no pressure" will become a popular catch phrase.
Posted by FCEtier at 5:15 PM