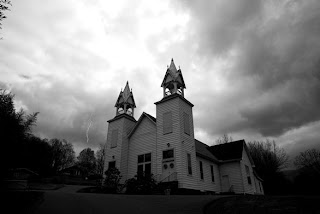 There’s a lyric from a hymn that goes something like, “…and they’ll know we are Christians by our love, by our love..” and that represents my credo very well. Always tried to live and behave in such a way that observers could figure me out by my actions.

Remember when Jimmy Carter was running for president? Billy Graham commented that you should be careful when someone had to tell you how good a Christian they were.

I tend to favor ecumenicalism as most informed people tend to agree that all religion is man-made. So why risk affiliation with an organization who claims an exclusive connection with The Almighty when you can join hands with all believers? I do not believe that Jesus established the Pentecostal denomination on the “Day of Pentecost” any more than I believe that just because Jesus told Peter that he was giving him the keys to the Kingdom, that he also ordained Peter as the first Pope.

Most of us typically believe what we do because of how we were raised and what we were exposed to as we grew up. At some point, we all have to make conscious decisions as to what we will continue to believe and live by – our own creeds if you will.

Another benefit of ecumenicalism is that as we are exposed to other beliefs, customs, and rituals, our own beliefs are challenged. Can your belief system withstand the challenge of new and or different ideas? If they can, I say, “Stick to your guns! Be firm in your belief and behave accordingly!”

Here’s some reading to enjoy along the way. Some of it is inspirational and some challenging and all were interesting to me.

HERO WITH A THOUSAND FACES by Joseph Campbell

THE DAVINCI CODE by Dan Brown

GOD IS NOT GREAT: HOW RELIGION POISONS EVERYTHING by

THE QUEST OF THE HISTORICAL JESUS by Albert Schweitzer

THE BIBLE: THE LIFE AND MORALS OF JESUS OF by Thomas Jefferson

THE GOSPEL ACCORDING TO THE BEATLES by Steve Turner