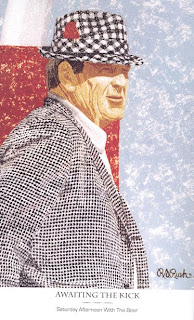 [Note of irony: Pirtle is a Longhorn, and I am an LSU Tiger!]
In 1907, Alabama and Auburn played to a 6-6 tie in their cross state rivalry game, the "Iron Bowl". The game was played in a sea of red mud, and Bama fought the heavy favorite to a tie, thus earning their now well known moniker, the "Crimson Tide". The University of Alabama had fielded it's first football team in the fall of 1892 and it was in that first season that Auburn had beat them 32-22. After that game, Alabama's coach, E. B. Beaumont was fired. Caleb Pirtle writes, "Within the hearts of Alabama resided a tradition of winning even before there was a tradition of football. Neither time nor circumstance would change it." And so begins the first of over fifty "moments" detailed in Pirtle's fifty-second book. Each point in time is arrestingly illustrated with original work by Rick Rush, an Alabama alum often hailed as "America's Sports Artist."
Each incident chosen for inclusion in this book stands alone for the casual reader who might let the book drop open and read a few pages. Collectively, they tell the story of college football in the United States from it's infancy in New England right up through the most recent moments of the 2010 BCS Championship game. Officially, the book ends with Bama's win over Auburn in the 2008 season but illustrates the attitudes and behaviors that led to the thrilling win over Texas. Along the way, the reader will enjoy encounters with such diverse characters as Tallulah Bankhead, President John F. Kennedy, and a score of famous (and infamous) people and coaches. I suspect that the probability of Auburn or Florida fans picking up this book is slim, but they would be missing a real treat. Even the most die-hard fans of opposing teams have come to appreciate and revere the accomplishments and legacy of Paul "Bear" Bryant. Many of the moments in this book clarify and strengthen not only the great stories of The Bear, but also those of his predecessors and those who have followed.
In the fall of 1970, USC came to Alabama and won big, 42-21. By inviting John McKay and his Trojans to town, The Bear had defied history and tradition. Southern Cal was playing in the The Deep South with an array of great black athletes. After the game, Bryant visited the visitors' dressing room and personally congratulated both the coach and the team. He then met individually with Sam Cunningham and Clarence Davis. The Bear realized then that everyone's sweat was the same color. Several years later, after the 1973 Cotton Bowl, Bryant answered a reporter's question about the racial mix on his team: "I don't have any white ones. I don't have any black ones. I just have football players. They come in all colors."
November 8, 2008 marked the return of Nick Saban to Baton Rouge. The previous season, LSU had gotten a certain measure of revenge against their former coach by winning 41-34 in Bryant-Denny Stadium. Now, the Tigers and 93,039 enthusiastic fans awaited his arrival into Death Valley as an opponent for the first time. Many had felt betrayed when he left for the Miami Dolphins and, now, most were just livid. Alabama won in a game that lasted more than four hours and included overtime. It was the first game that season in which the Crimson Tide had trailed and had to come from behind. Not only did they come from behind, they stepped out front in the SEC West and this game, as much as any, marked the return to prominence of Alabama in college football.
There have been many great moments for Alabama since 1892 and this coffee-table-style book includes encounters with many of the country's finest teams. Regardless of your team loyalty you're sure to find several moments you'll remember -- and many that will be new. With their thirteenth national championship, it is easy to understand why Bama fans feel that the Tide will roll on forever and the great moments will never end.
Posted by FCEtier at 7:14 PM