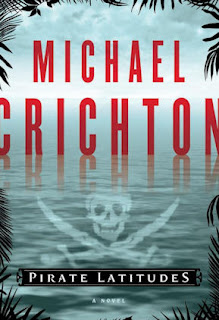 Have you ever been to a party and met lots of people in a short period of time? Then you got home and said, "There were several really interesting people there! It sure would have been nice to get to know them a bit better." That's how I felt after this quick and enthralling read. I was eager to get into the story and Crichton made it easy. The story begins with a public hanging and escalates with the arrival of the merchantman Godspeed. The ship brings new characters and news of events that lead to adventure, violence, destruction, romance and mystery on the high seas of the Caribbean and the Atlantic. Interesting, intimidating and charming personalities appear in surprising people as diverse as privateers, politicians, courtesans, pirates, whores, transvestites, executioners and Harvard graduates! Crichton continues his clever connections with places and people. An island in this novel repeats the name of an island from The Lost World and a ship captain shares the author's alma mater. The lookout for the expedition, a sailor with incredible vision, is named "Lazue" which is a bastardization of the French term "les yeux" for "eyes". We meet an executioner named Sanson (a la "Manson") and visit a place that's name means "slaughter" A willing reader is quickly caught up in the whirlwind action and can easily overlook the lack of character development, "Ok, he's a pirate and she's a whore. Get on with the story!"

And what an interesting story it is! Our would-be hero sails off with a hand-picked crew to face his demons and foes. Part of his mission is to identify just who it is that he is up against in a romantic world of pirates and politicians where betrayal and loyalty walk hand-in-hand. How can you be a conquerer and return home a hero if you aren't sure of your enemy? Our protagonist (is he a privateer or a pirate?) sets out on his mission financed by important people to deal with The Black Ship, Monkey Bay, The Mouth of the Dragon and a foreboding fortress on the island of Mantanceros. Crichton's fans have come to expect enlightenment in each of his books whether it is nano technology, gene splicing, poisonous politics, or reverse sex discrimination. They won't be disappointed with Pirate Latitudes's monographs on 17th century weaponry, sailing ships, and navigation. Also included is an explanation of the posturing used by sailors in which they would stand up straight on the bow with their arms extended, back to the wind (remember that Decaprio/Winslet scene in Titanic?). If the characters are not developed enough to suit the discriminating reader, then surely the setting will satisfy. Establishments with names like "The Black Bear", "Queen's Arms", "The Yellow Scamp" and "The Blue Goat" and their seedy characteristics place the reader right there with the characters. Attention is also given to oppressively hot jungles, mosquitoes, and foreboding geography.

Island life in 1665 was not easy. It may sound romantic today but it had to have been brutal then. And a pirate's life was always violent. One such incident: "Hunter chose that moment to lunge. He pushed his palm flat against the upturned tankard, ramming it back against Levasseur's face, which thudded against the back wall. Levasseur gurgled and collapsed, blood dripping from his mouth. Hunter grabbed the tankard and crashed it down on Levasseur's skull. The Frenchman lay unconscious. Hunter shook his hand free of the wine on his fingers, turned, and walked out of Mrs. Denby's Inn. He stepped ankle-deep into the mud of the street, but paid no attention."

Readers will be glad that an assistant paid attention and found this complete manuscript in the late author's files as the book is a fitting conclusion to a remarkable career. Crichton remains to this day, the only writer to have had the number one book, movie, and TV show at the same time. The book ends with an epilogue detailing the conclusion of the lives of several of the characters as well as an epitaph that is befitting Crichton himself: "Honest Adventurer and Seaman, Beloved of His Countrymen In The New World. Vincit"

[Note: According to a New York Times article, Harper Collins will also publish a technological thriller of which Crichton had finished a third. The publisher and estate will find an author to finish the novel based on Michael Crichton's notes and plan to publish the novel in the fall of 2010.]