I'll Catch You at the Light 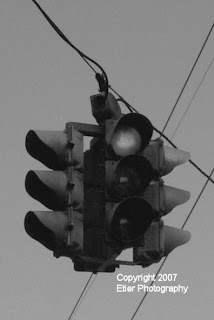 [Previously published on Blogcritics.org]
On the way to work one morning last week, I was accelerating up to the 50 mph limit when a car closed fast behind me and passed in a stretch of road where the double yellow line was absent for just a few hundred feet. It would have been a close call had another car been approaching from ahead. The passer who was in such a hurry zoomed over the hill, around a curve and out of sight. Just a minute or two later, I pulled up right beside him at a red light. The temptation to wave at him was almost irresistible! In the end, I just focused on the light and to my surprise, accelerated away from the light ahead of him. Maybe I beat him off the line because he wasn't paying attention, but of course, he passed me again before we got to the school zone.
My commute to work is twenty-seven miles and depending on weather and traffic usually takes forty minutes. About ten years ago I decided that the pace of my life could slow down a bit and not much would change. It was easy to rely on my car's cruise control. Setting this handy device at about five mph over the limit tends to keep me going at a speed the state troopers don't seem to mind. Other drivers do. Most just fly by like I'm standing still and ignore me. Some are annoyed. It has always struck me that tailgating at sixty mph is dangerous so when another driver passes me and cuts right in front of me I change lanes. Remember the old rule about keeping one car length per ten mph behind the vehicle in front? The last fifteen miles to my job is all four-lane divided highway and ends at a very long light -- it must be three or four minutes if it catches you, and backs cars up thirty or more deep. For four years now, I've taken the same route to work so it has been easy to learn which lane moves the fastest and at which times of the day. So it seems, not a day goes by that I don't find myself at the "long light" next to someone that passed me earlier on the journey.
Fortunately, road rage is a thing of my past, and personal victories in morning traffic are no longer important. It does feel good though, to be able to leave the vehicle and walk in to work with a spring in my step and a smile in my heart from a fresh reminder that I am indeed a persistent tortoise.
Posted by FCEtier at 2:59 PM