Never leave home without it! 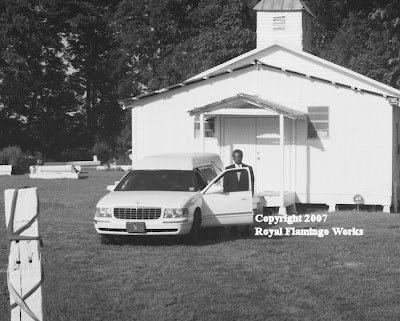 I found myself in front of a distinguished gentleman. He was professionally dressed in a dark suit and wore a solemn but pleasant expression. He was standing on the driver’s side of a sleek white hearse with the door opened. The hearse was parked in front of a small white clapboard church which was the dominant structure in a clearing in the woods that lined the road. This solitary attendant was awaiting the beginning of a funeral.

I had been traveling the back roads in rural on my way to help cover a store one morning, when I passed this most unusual scene. I stopped the car and turned around. As I walked up to meet him, I made sure my camera was prominently displayed so that he would have no doubt as to my intentions. He answered my request without speaking. The sentinel agreed to let me take his photograph with a barely noticeable smile and a slight nod of his head.

At this point in my pursuit of photography I had not considered selling my work, so there was no model release available. Would this image have become a best seller? That will never be known. It has become a personal favorite, occupies a space of distinction on my wall, and is an effective educational tool, as well as a potent reminder.

Never leave home without your camera and a few model releases!

(see more of my work at: http://www.royalflamingoworks.com