The speaker after lunch at the Kiwanis Club was personal security specialist, Joyce Chamberlain. She gave us several suggestions on how to protect ourselves. Some of the suggestions, I’ve never forgotten.  The event at which she spoke occurred over twenty years ago. 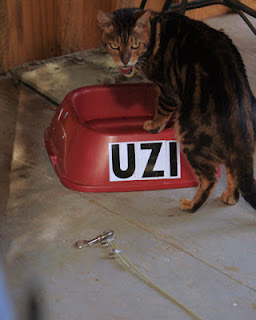 Just after the turn of the century, my wife and I moved to an area of town that had endured some vandalism and some break-ins.  We used one of Joyce’s ideas.  We purchased an oversized dog dish and gave it a highly visible location on the front porch. My wife came up with a creative breed of dog, and Uzi, the German-pit-weiler was born.  It’s hard to say for

Our cat, Boris in Uzi's dish.
sure that Uzi’s clearly labeled dish helped prevent any unwanted visitors, but it certainly scared off the neighbor’s grandson.
In my first book, The Tourist Killer, there were a couple of scenes in which it was revealed that Hixon had several dogs. More recently, in my second novel, The Presidents Club, it is made clear that our favorite ex-FBI agent has three dogs. Of course, one of them is Uzi. For the other two, I wanted one to be a breed that enjoyed a vicious (though not necessarily warranted) reputation so it was a Doberman Pinscher named Luger.  Finally, since Hixon lived out in the mountains, he insisted on a hound.
According to Wikipedia, “Bavarian mountain hounds are calm, quiet, poised, and very attached to their masters and family. When hunting, they are hard, single-minded, and persistent. Courageous, spirited, fast, and agile, they are at ease on a rugged terrain, with a superb nose and powerful hunting instinct.
“The Bavarian Mountain is not suited for city life. It is in regular need of space and exercise and also requires regular brushing. They are not dogs for the casual hunter. Most are owned and used by foresters and game wardens.”
John Hixon’s third canine companion became Caroline, a loyal Bavarian mountain hound to whom he reads.
Together, he refers to them as his “gang.”
Will they come through for him when the chips are down?
Which dog(s) will make it to the last page?
Become a regular reader of this serial novel and find out the answers to these questions and many more.
Posted by FCEtier at 12:25 PM