Your Man in Service 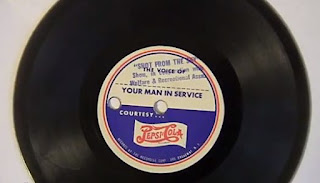 Remember that box of photographs your parents had?
You know, the one on the top shelf in your father’s closet?
Or the one on top of the wardrobe in the hall.
Maybe in your house it was a cardboard box shoved under the bed.
In my house, it was a box that coat hangers had previously occupied. (My father and his brother owned a dry cleaning business.) Inside it was several shoe boxes.
More than half of the photos were black and white.
The ones in color were faded. Color film technology in the sixties wasn’t the best, but it was “Fox,” from San Antonio, TX.

I still remember the running Fox logo on the outside of the envelope in which the photos arrived from the drugstore -- Harper’s Pharmacy, Mangham, Louisiana.

If you’re a baby boomer, this memory probably hits close to home.
If your parents were boomers, most likely you remember stories about the “picture box.”

Wouldn’t it be cool if those photos could talk?

Somewhere in our box of photos we found several “V-mail” letters.  Remember those one page form letters that folded into an envelope?

Wouldn’t it be cool if those letters could talk?

Art Hoffman and his wife, Martha, found a way to hear them.

The talking was coming from Martha’s father, who had passed in 2005. Art and Martha had to clean out a closet so that workers could update and paint the room. They found a box of old records. Not letters. Not vinyl. Older than that. These were records that would break if dropped. The fact that these discs had survived over fifty years of storage was significant enough for interest.

What Art and Martha found in the record box was stunning.

During World War II, the Pepsi Cola company sponsored a program with which service people could record a message on a 78 rpm record. Many of them did just that and sent them to loved ones.

Walter Eddy, her father, had availed himself of Pepsi’s “Your Man in Service” program and recorded a message to the woman whom he would later marry. We can all hear what he sounded like when he asked, “ How's everything at home? Write more often if you can,” thanks to Art’s video. Have you heard what your father sounded like when he was twenty-something?

Mr. Eddy survived a tour of duty in the South Pacific and lived until March 2005. Not only does he live in the memories of those who knew and loved him, we can all appreciate and learn from his thoughtfulness.

Check your closets, under the beds, and in the attic. If you have a relative who served in World War II, you may be able to hear them again. Don’t wait.  After all,  WWII vets are dying - 10,000 a day.

Look for an envelope or record with the “Your Man in Service” label -- then listen closely.

Listen to the history Art and Martha heard in this video:

Our regular readers know how much we value comments.  However today, we request that in lieu of comments here, please offer your feedback to Art on YouTube.